As I get a moment to sit down and collect my thoughts, I am thankful to be sitting in my classroom with a few students that are dedicated to making up missing work. I am totally exhausted from all events that have come before me. However, I am here finally jotting a few words. Knowing that this year is almost over, I have to get back into the swing of things in sharing and reflecting on my interactions and activities from the week. I am especially thankful for writing this blog post on a Microsoft Surface. My experience with this device has been refreshing. I am also thankful for going to some awesome professional development for the past few weeks. But most of all, I am thankful for a beautiful life, beautiful family, and beautiful friends. God bless… 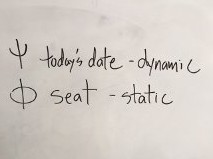 these two greek letters Phi & Psi in my class activities.

This would all students to see relationships of numbers and also bring authenticity to student work. I will later give examples and share my students’ artifacts.

We are still having PowerSchool woes. It is very unfortunate that Pearson doesn’t have a PLAN B for system to handle server or database issues. Whatever happened to if it ain’t broke, don’t fix it with the other eSIS system?

North Carolina officials are trying to get a refund from Pearson because of flaws in the data system that Pearson is running for the state.

Pearson is charging the state $7.1 million for its information system but it doesn’t work.

Here are some of the problems with Pearson’s PowerSchool:

At the Observer’s request, CMS produced a summary of ongoing problems with PowerSchool.

• Transcripts: Cannot produce transcripts for mid-year graduates. System maintenance has wiped out some data for other students.

• Graduates and dropouts: Reporting systems on retention, promotion and graduation don’t work; there is no dropout reporting system.

• School activity reports: CMS has created work-around systems because of flaws in reports that track teacher qualifications and student-teacher ratios.

I gotta thank http://ccssmath.org/ for this list of resources for math educators. If you are deciding to front-load/flip your classroom, this is a great place to start.

I am familiar to approximately 98.6% of the list. So, this Labor Day weekend is a good time to explore!

I ran into this Pringles Can offer this evening after popping a few of these crispy treats. I was curious to see if it was worth investing in a total of 4 canisters of these chips. Thanks to youtube, I have the opportunity to get a preview of this sound device. After watching the following video, I just wonder what can be done to this can to increase the bass output? Modifications or hacks will surely be coming next.

Back in the day when I had control of my Hotmail inbox, I used a nifty email client program that was attached to Windows called Outlook Express. It allowed me to check (offline & archive) my mail, tune into the groovy newsgroups, and update my contacts with ease. After the Vista upgrade, I lost my friend. 😦

Now, I have discovered Windows Live Mail, my long lost friend has been replaced with a lean mean machine! I am currently checking it out so I really cannot share my personal pros and cons of this new product. However, I am sure that I will not be disappointed. Thanks Micro$wizzle!

Finally making time to jot a few thoughts in my blog….

This year I have different role at my school. I have taken on the responsibility as the official tech contact in addition to co-teaching in an 8th grade math resource classroom.

I will utilize my blog in addition to twitter to facilitate some meaningful dialogue on my experiences with both challenging endeavors.  I look forward to working on my SLO (Student Learning Objectives) and PDP (Professional Development Plan), too. Sarcasm intended (just kidding!)

I will share details of these two required beasts later…